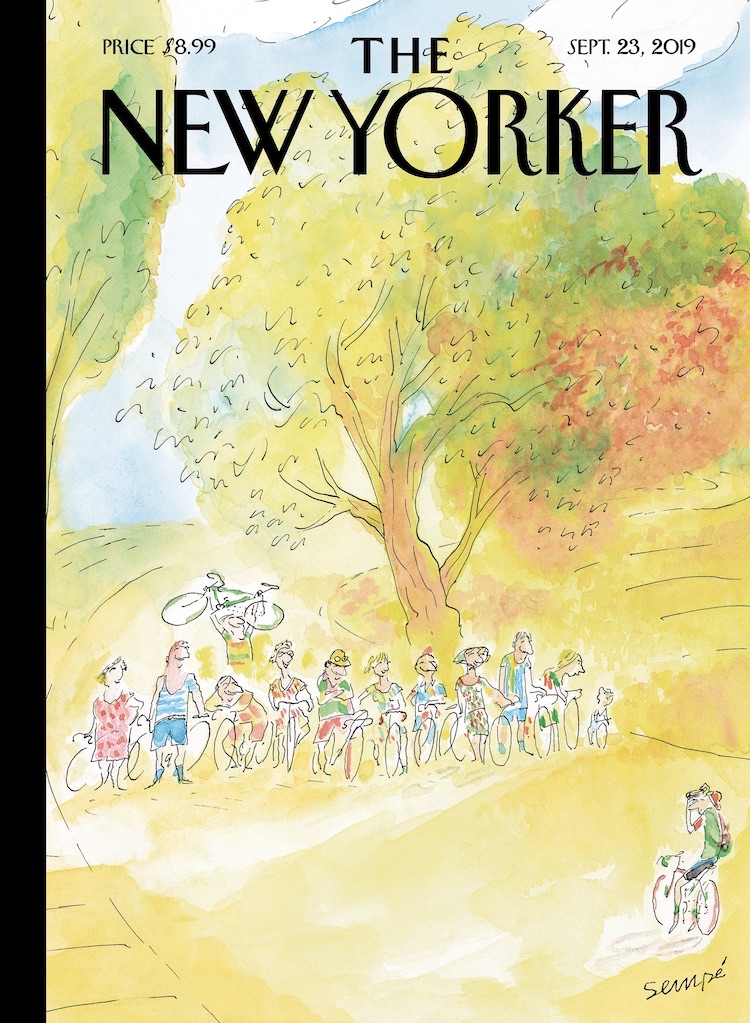 Our Sunday-Morning Outings
The New Yorker (23 September 2019)
art by Jean-Jacques Sempé
In the past fifty years, many of J. J. Sempé’s hundred and twelve covers have celebrated the gratifications offered by la petite reine, his beloved bicycle. With a fragile and delicate line, Sempé captures a wide range of life’s simple pleasures - friendship, nature, animals, and music are recurrent themes - that even contemporary French people can’t take for granted. We recently chatted with the eighty-seven-year-old artist, en français, about the sources of his inspiration and the dreams that haunt his old age. You have often spoken of your love of bicycling, but what inspired this specific image?
JEAN-JACQUES SEMPÉ:
It’s always been one of my dreams - to have a group of friends who go for bike rides in the country every Sunday morning. In real life, it never happened. I kept trying to organize it but everyone was always too busy to slow down for it.

How did you conceive those outings?

Well, we’d get a bit of exercise, build some muscle and also spend some time together. We’d take our bikes on the train and get to the small country roads that run along the fields. It’s quiet and smells good and it’s totally out of fashion. Sometimes one of us would know a good country restaurant, but then it would turn out that it was closed. I keep thinking back on those outings - it’s one of the things I really wish I had done.

Do you have many other unrealized dreams?

Well, my most vivid dream is to have a piano duel with Duke Ellington. And, of course, he gets to win because I’m pathetic and he’s very, very good. I think about it virtually every night. Ellington is a man I adored. There’s a photo of him, smiling, on my piano. I look at him when I play and search for his approbation.

Did you ever meet Ellington?

Yes, once, a while back in Saint-Tropez. He was giving a concert and a friend of mine said, Come with us, we’ll have a drink with him afterward. When the concert ended, I rushed to the back. It was pitch black, no one was there, but in the dark I made out the outline of a piano and sat down. I was hitting a few keys when Ellington walked in. He said, “Not so bad!,” sat next to me, and said, “Do the right hand, I’ll do the left.” (The right hand is the easier one, of course.) We played a piece of his that I know quite well: “Satin Doll.” By then there were lots of other people around and they drew his attention away. I was so impressed that I had exchanged a few notes with him that I didn’t want anyone to talk to me or even look at me. I was trying to preserve the moment. 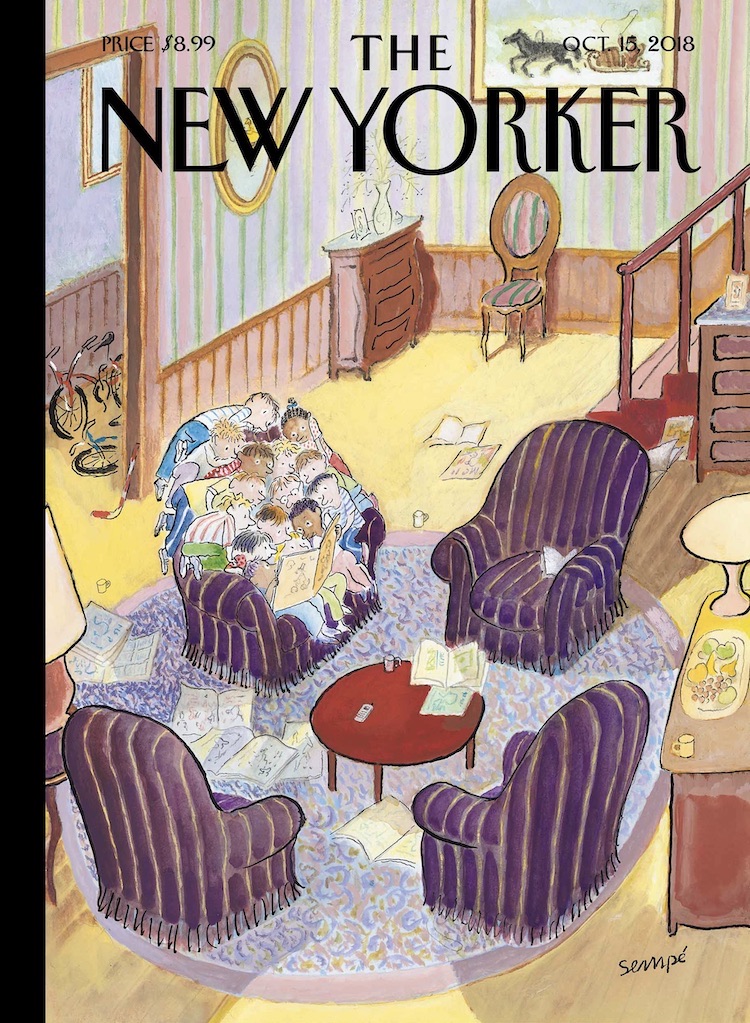 Reading Group
The New Yorker (15 October 2018)
art by Jean-Jacques Sempé
The cover for the magazine’s Fall Books Issue was done by Jean-Jacques Sempé... He recently talked to us about childhood, one of the more recurrent themes in his work. Your drawings often riff on [the theme of childhood]. What draws you to it?

I find youth attractive for its innocence and naïveté. Not my youth - I have only horrible memories of when I was young - but the hope that comes with being young. I miss the eagerness for discovery, the belief that things could get better.

You created many features for kids, including Le Petit Nicolas. Is there a special appeal in working for children?

Le Petit Nicolas was a series of books I did with René Goscinny, the French comics legend, who also was the scriptwriter of Astérix. I grew up in Bordeaux, in a piss-poor family, and hated school - I dropped out to enroll in the Army just so I could eat and have a place to sleep. René had gone to the Lycée Français in Buenos Aires, Argentina, where he was a good student - very much unlike me.

The Nicolas stories were a way to revisit the misery I endured while growing up while making sure everything came out just fine. Kids are always getting into fights but no one is hurt afterward.

Did you have favorite books when you were growing up?

I once read, in the advice column of a women’s magazine, that you should read as much as you can to improve your spelling. There was nothing to read at home, so I read the back of packages, manuals, billboards - anything I could find. I loved everything Alexandre Dumas wrote, especially “The Three Musketeers.” (I was d’Artagnan!) And I got to be a very good speller, which made me inordinately proud. 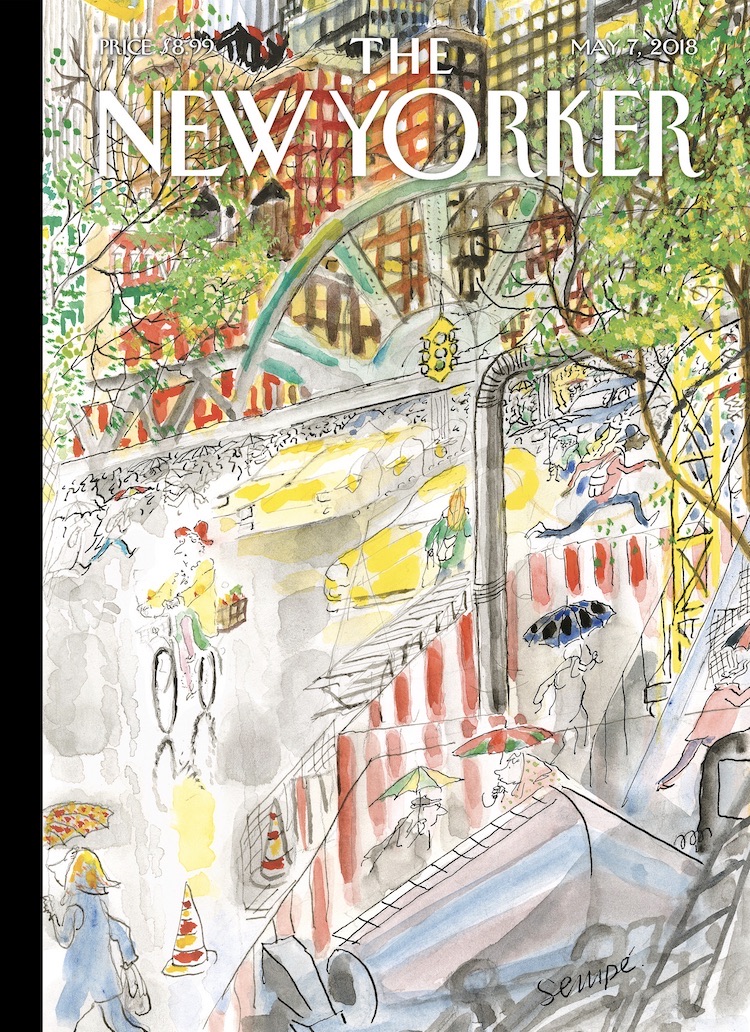 New York City is one of your most obsessive themes. What draws you to that landscape?

I’m passionately attached to the city, so I try to find it again by drawing it. I love the colors in New York. They’re dynamic: bright yellows, greens, reds, and blues. Paris, where I live, is beautiful but it’s always gray. I love Paris too, but it’s not the same.

What are other differences between drawing New York and Paris? How are the cities different for you?

New York is a place where people know what it’s like to be starting out. New Yorkers have sympathy for those who are trying to se débrouiller, to make do or get by. Novices aren’t discouraged. It’s not a bourgeois town set in its ways like Paris. In New York, everyone has to keep moving forward.

It’s often hard to distinguish what era your work is set in. There’s a timeless quality there. Is that intentional?

You flatter me, but, yes, in a way. When I think about New York, I think about the whole. I try to paint an ambience that has the buildings, the smells, and the sounds, Duke Ellington and James Thurber. Here, I wanted to paint a petite dame, a little old lady who holds her balance in that immense and magnificent town.

Your first published cover was in 1978, yet you’ve made only five or six trips to New York over the past forty years. Why don’t you come more often?

A big issue for me is the language barrier. If I had been able to speak English well, I’d probably have settled there. But I just don’t speak it at all. I didn’t want to be seen as one of those arrogant Frenchmen who only speaks his own language. I hate not being able to talk. It throws me back to the old days, when I was young and so paralyzed with shyness that I stuttered.

You’ve noted Saul Steinberg as an influence. Any others?

Oh, yes! It’s all the artists of The New Yorker who have inspired me. Sam Cobean, Mary Petty, Saxon, or Chas Addams, too numerous to name them all - what they have in common is elegance and lightness of touch. I adore Thurber. I learned from all of them, I shaped my work just so I could fit in that group. 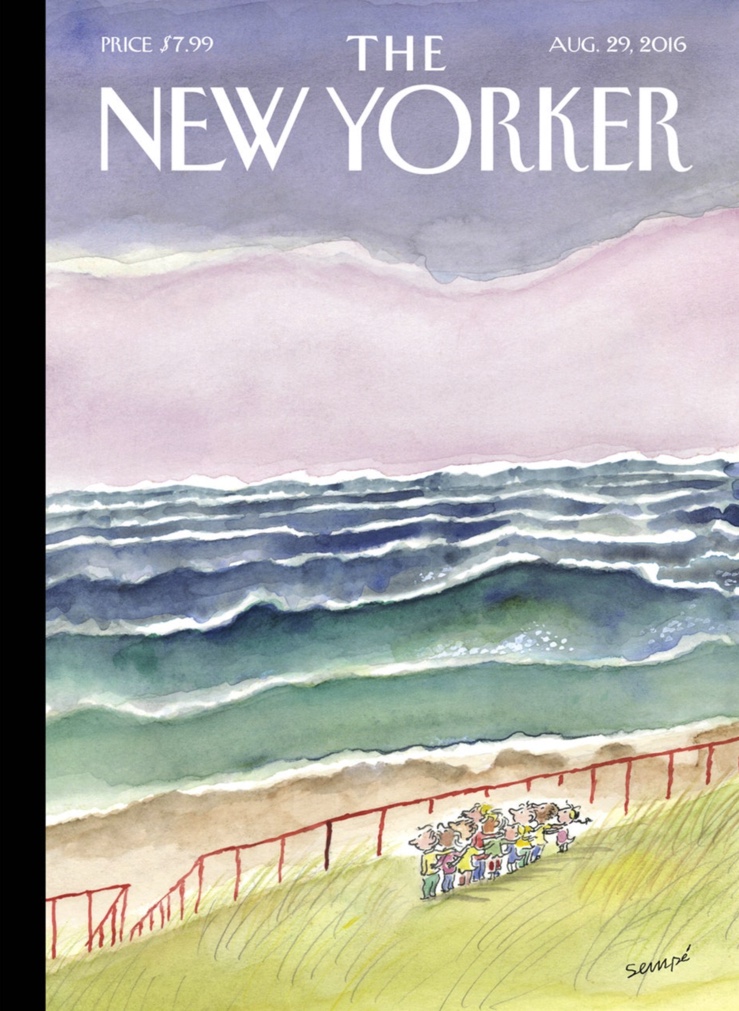 It’s an obsession, I would love to become a child on the beach once again. It may sound infantile, but that’s the feeling I long for: to be a child without care, taking in the immensity of the ocean and still feeling safe.

Email ThisBlogThis!Share to TwitterShare to FacebookShare to Pinterest
Labels: Sempe, The New Yorker