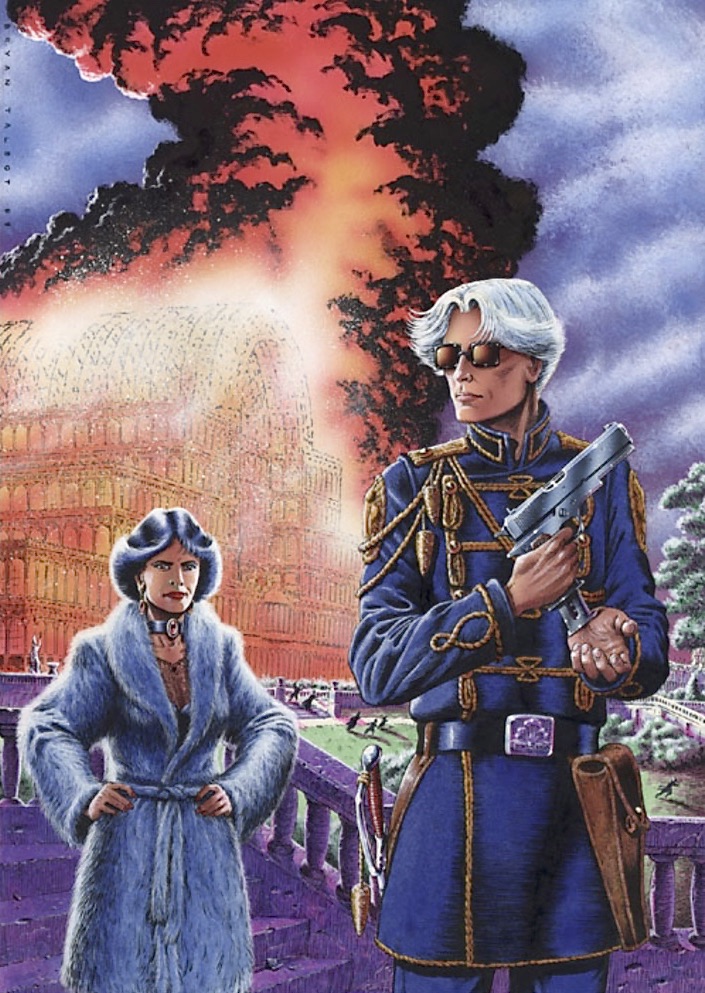 The Adventures of Luther Arkwright
by Bryan Talbot
ALAN MOORE:
(from the introduction to Luther Arkwright Book II: Transfiguration, 1987)
We live in interesting times. Comics, suddenly caught in the shockwave of a media explosion, seem to be brimming with new possibilities, new format, new storytelling ideas to suit a new and more sophisticated audience. Finding oneself in the middle of such a pyrotechnic display of serious critical attention and flying superlatives, it's tempting to slide into the belief that this has all somehow happened overnight; that an entire funnybook renaissance has come into being full blown, like Athena springing from the head of Zeus.

This, of course, is rubbish. As anyone with even a passing interest in the comic medium over the past twenty years could tell you, today's innovations are built squarely upon the foundations layed by a string of underpaid and largely unsung craftsmen and women stretching back to woodcut artist Lynd Ward, ranging through Will Eisner to the underground artists of the sixties and beyond. These were and are people who always insisted upon owning their own work; upon following their own creative control. Some of us get to own our own creations. We have a way to go yet, but we wouldn't have made it this far without the inspiration provided by the pioneers mentioned above.

Which brings me to Bryan Talbot and to Luther Arkwright.

Back in the seventies, there was no British comic scene worth mentioning. The glory days of the Reid / Law / Watkins & Baxendale Beano were long gone, and although 2000AD had appeared, it's revitalization of the boy's adventure comic was still some years in the future. The Alternative comics were in similarly bleak condition: the H. Bunch reprints of American underground material had vanished, and apart from Hunt Emerson and the Arzak crowd, there was little in the way of home grown material to be had.

Luther Arkwright was the exception. Starting out as just one strip in the anthology title, Near Myths, Luther Arkwright went way beyond anything that creator Bryan Talbot had attempted in his previous tribute laden doper fantasies, the Chester P Hackenbush series. Synthesizing influences from as far abroad as the New Wave science fiction of the period and the films of Roeg and Peckinpah, he created a seamless whole, a work ambitious in both scope and complexity that still stands unique upon the comics landscape. As the only avant garde graphic adventure strip of its day, there was nothing like it back in the seventies. There is nothing quite like it now.

For me, the heart of the strips appeal lies in its relentless experimentation. While remaining lucid, it explores as wide a range if graphic storytelling as you're likely to find between soft covers these days. That it accomplishes this with such visual power and charm is an added bonus. A superb illustrator, Bryan Talbot firmly anchors his complex and shifting metaphysical fantasy in a solid bedrock of beautifully rendered Victorian architecture and meticulously researched period backdrops. The combined effect is stunning.

As a crucial stepping stone between where comics were and where they are now, Bryan deserves our gratitude, and Luther Arkwright deserves to be read. More than this, it demands our attention as an intricate and fascinating graphic accomplishment in its own right.

Step this way for the multiverse...