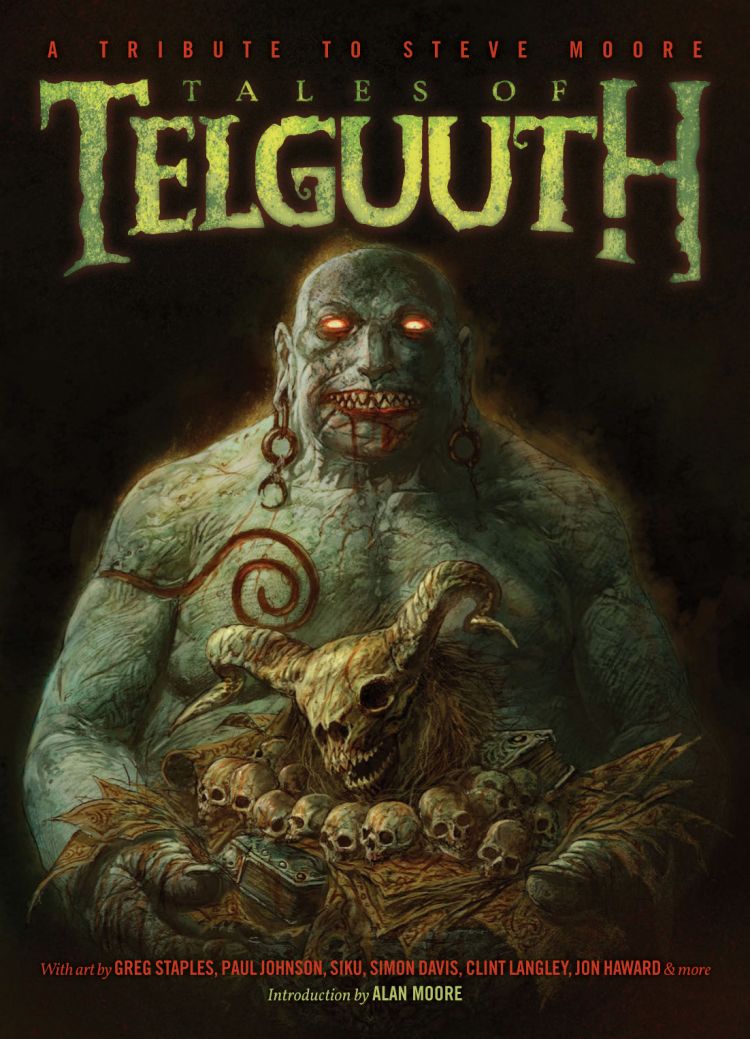 PURLIEUS OF LICH & PERIDOT
by Alan Moore
(from the introduction to Tales of Telguuth by Steve Moore, 2015)

Steve Moore (June 11th, 1949 - March 14th, 2014) remains a massively influential figure in a diverse array of fields ranging from Oriental studies and I-Ching scholarship, through his extensive Fortean work, to his standing as an occultist or as an authority on Decadent and Gothic literature. His patiently accrued collections of Chinese and Japanese swords; his unique archive of Asian cinema; his thirty-year dream record; his accomplishments as classical scholar and contemporary moon-goddess worshipper: all of these clearly require an introductory essay of their own in order to unpack the intellectual breadth and the importance of this extraordinary individual. Just as clearly, given that you're reading this as preface to a trade collection of his Telguuth comic strips, none of the things above are what we're here to talk about. They are included only to provide a little necessary context to the work as writer of comics, science fiction and fantasy for which my late mate was best known.

Starting work at Odhams Press in 1967, aged sixteen, Steve Moore was an enthusiastic science fiction fan and, more unusually, one of the country's earliest devotees of comic books. As a perfect example of the audience that the publishers of Wham, Pow, Fantastic and Terrific were hoping to reach, his ideas were listened to and and a result the above weekly comics became far more fan-friendly endeavours... this long before there was even such a phenomenon as a recognised English comic fan. Using the benefits that his new stays as sud-editor allowed him, he published the UK's first comics-fanzine, Ka-Pow, and co-founded the first Bristish comic conventions. These would lead to the creation of a healthy, progressive indigenous comic scene and, directly or indirectly, to most of the early British comic book talents of whom you've ever heard becoming involved with the medium and the industry. Without Steve Moore the modern comic landscape would look very different, if it was even noticeably there at all. This is, of course, without considering his contributions as a writer.

Much like Woody Allen's Zelig, Steve Moore would appear to have been involved intimately with the greater number of the British comic scene's most influential landmarks such as Doctor Who weekly and monthly, Warrior, and, in 1976, a fledgling weekly title which would become the venerable institution known as 2000AD. Here he created that long-standing format and excellent proving ground for new talent, Tharg's Future Shocks, along with is work on the reanimated versions of boyhood favourites Dan Dare and Rick Random, which in later years there were a slew of inventive serials such as Valkyries or his space-Yakuza narrative Red Fang. And yet, of all the many feathers in his 2000AD cap, the writing of which he remained the proudest was his work on the delirious and exquisite horror-fantasy, Tales of Telguuth.

His writing style, commenced in the restrictive and pragmatic confines of the early boys' adventure comic was brisk, spare and functional in keeping with the editorial directives of the 1960s, but throughout his long career you can see finer, more exotic sensibilities attempting to break through without disrupting the professional requirements of a fast-paced action story. By the time that he was in his twenties, he was reading less and less adventure fiction (prose or comic book) for personal enjoyment and was gravitating more towards the Classical or Oriental; to the Gothic and the Decadent. The jewelled concerns of language and originality of concept became his priorities, more so than the old-school story requirements of perpetual physical activity and constant danger. He wanted to write a fantasy narrative which reflected his genuine personal tastes and interests in that genre. These had shifted from a general affection for the field of sword and sorcery to a more rarefied appreciation for the Dying Earth tales of Jack Valance and, especially, the glittering fantasies and decadent prose-poetry penned by Clark Ashton Smith.

Smith (1893-1961) started out as a young poet of considerable promise before being led, in the 1920s, into fantasy fiction through the influence and example of his friend and correspondent H.P. Lovecraft. Smith's origins as a poet and his fastidious use of language were evident throughout his career as a fantasy and science fiction writer, even when working under the most narrow and draconian of restraints. Among his prolific creation of fantastic environments, there existed a few that Smith returned to again and again, such as the imaginary medieval realm of Averoigne or, more significantly, his breathtakingly weird 'Last Continent', Zothique. With many of his stories appearing the legendary pulp magazine Weird Tales they were understandably horror-inflected, their strikingly strange ideas and crystalline language lifting them head and shoulders above all of the magazines other contributors with the arguable exception of Lovecraft himself. Discovering Smith was as much of an inspiration for Steve Moore as had been Smith's own discovery of Lovecraft, or Lovecraft's of his early idol Lord Dunsany. There was that same recognition of a kindred literary spirit, the gratifying sense of someone else attempting to articulate that same creative urges and in doing so establishing a blueprint for the way in which such work might be attempted.

There are some early examples of Steve trying to apply the sensibilities of Smith to comic strip adventure, such as in the Claustrophobia and Twilight continuities that he essayed for Warrior, but its not until Telguuth emerges as a perfect vehicle for such ideas that we see him employing the full range of unrestrained and decadent imagination that his readings had awoken in him. In Telguuth, where there is no continuing character save for the vicious and phantasmagoric world itself, he was set free from the requirement to ensure his leading men and leading women lived to see another episode and could enjoy the 'anything-might-happen' frisson that arises from a self-contained short story. Given their potential disposability, Telguuth's array of monsters and protagonists are thereby liberated from the need to be conventional heroes or villains. In Telguuth's nightmarish milieu, with death or worse prone to descend at any instant, most of the inhabitants appear to be unburdened by morality and there is no sense of an ethical imperative in play across this frightful and hallucinatory terrain. Amongst the numerous and largely diabolic deities of Telguuth, none are just and loving shepherds eager to assist the fair or happy ending, and in these upsetting tales of desperate and ill-motivated individuals blundering into horrific situations which they do not fully comprehend, we are shown a reality which, despite its extravagant fantasy trappings, is actually far closer to the reality in which most of us are unlucky enough to be living. The questing hero is a self-serving oaf, frequently undone by his own disastrous lack of imagination. The sultry heroine and the villainous magician, equally flawed and desperate, are liable to fall prey to their own magical subterfuges and the truly ghastly entities they have attempted to control. On Telguuth, as on our only slightly less exotic and demented planet, few thing can be said to work out for the best.

In these often sadistically amusing stories of the dreadful, the perverse and the grotesque we can see one of the most important British comic writers of the last fifty years having the time of his life. The musical names of his characters and cities roll off the tongue like poisonous beads of mercury, the curses and the demons are of the most fiendish and implacable variety and every tales extends the map of a new, gem-encrusted alien hall. This is an author ecstatically at play within his feverish, overgrown and not-infrequently alarming deviant imagination, a deranged and capricious sorcery to equal anything that ancient and ghoul-haunted Teekar-Tannlan has to offer.

Of the many dreamlands that Steve Moore engendered, it can be assumed, I think, that Telguuth was the closest to his heart outside the moonlit territory of his fabulous prose novel Somnium, as evidenced by the plain fact that Telguuth was the only world of fiction that he never could relinquish, even after his retirement from the comic industry. His self-published not-for-profit Tales of Telguuth prose short stories were a continual delight to the small circle of friends and acquaintances fortunate enough to be on his mailing list. He was halfway through sending out his latest tale, The Marmoreal Frown of Ahuralura Manz, when he suffered the heart attack that finally removed him from our midst, and his admirers will be relieved to hear that Strange Attractor Press are issuing a limited edition of these rare and gorgeously bedizened little masterpieces to coincide with this splendid collection of his bitter fables from 2000AD, illustrated by a fine assortment of young and contemporary artists who've arisen from a British comic field that Steve Moore ploughed, sowed and stamped out nearly fifty years ago.

To those of you who care about comics, about fantasy, or about the art of writing itself, welcome to a marvellous and heartless wonderland. Welcome to Telguuth.