Tantrum: An Appreciation by Neil Gaiman 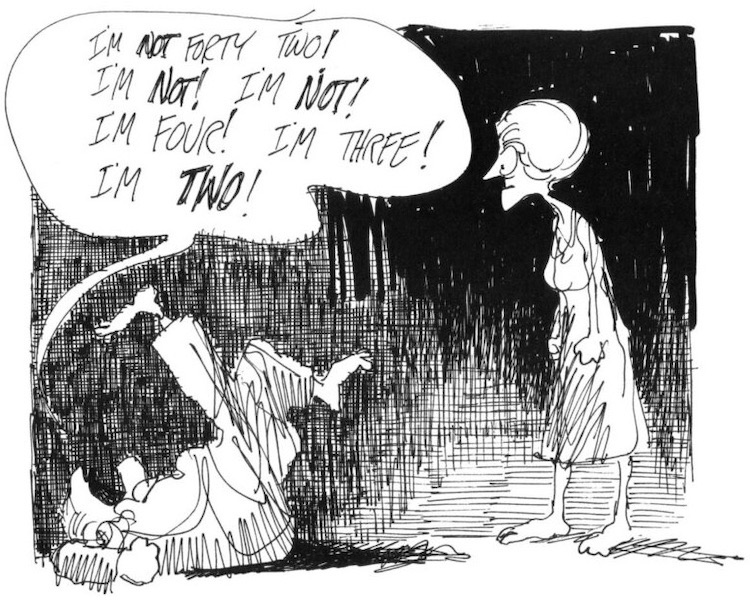 Tantrum (1979)
by Jules Feiffer
NEIL GAIMAN:
(from the introduction to the Fantagraphics Books 1997 edition of Tantrum)
There was a Jules Feiffer cartoon in the mid-sixties in which a baby, hardly old enough to walk, catalogues the grievances inflicted upon it by its parents, each indignity accompanied by a soothing "Mommy loves baby. Daddy loves baby."

"Whatever that word 'love' means --" says the baby, essaying its first steps, "I can hardly wait till I'm big enough to do it to them."

When I first discovered Jules Feiffer I was... what? Four years old? Five, maybe. This was in England, in 1964 or 1965, and the book was a hardback blue-covered edition of The Explainers, Feiffer's 1962 collection, and I read it as only a child can read a favourite book: over and over and over. I had little or no context for the assortment of losers and dreamers and lovers and dancers and bosses and mothers and children and company men, but I kept reading and rereading, trying to understand, happy with whatever comprehension I could pull from the pages, from what Feiffer described as "an endless babble of self-interest, self-loathing, self-searching and evasion.” I read and reread it, certain that if I understood it, I would have some kind of key to the adult world.

It was the first place I had ever encountered the character of Superman: there was a strip in which he "pulled a chick out of a river" and eventually married her. I'd never encountered that use of the word 'chick' before, and assumed that Superman had married a small fluffy yellow baby chicken. It made as much sense as anything else in the adult world. And it didn't matter: I understood the fundamental story -- of compromise and insecurity -- as well as I understood any of them. I read them again and again, a few drawings to a page, a few pages to each strip. And I decided that when I grew up, I wanted to do that. I wanted to tell those stories and do those drawings and have that perfect sense of pacing and the killer undercut last line.

(I never did, and I never will. But any successes I've had as a writer in the field of words-and-pictures have their roots in poring over the drawings in The Explainers, and reading the dialogue, and trying to understand the mysteries of economy and timing that were peculiarly Jules Feiffer's.)

That was over thirty years ago. In the intervening years the strips that I read back then, in The Explainers, and, later, in discovered copies of Sick, Sick, Sick and Hold Me!, have waited patiently in the back of my head, commenting on the events around me. ("Why is she doing that?" "To lose weight."/ "You're not perfection... but you do have an interesting off-beat color... and besides, it's getting dark."/ "What I wouldn't give to be a non-conformist like all those others."/ "Nobody knows it but I'm a complete work of fiction")

So. Time passed. I learned how to do joined-up writing. Feiffer continued cartooning, becoming one of the sharpest political commentators there has ever been in that form, and writing plays, and films, and prose books.

In 1980, I got a call from my friend Dave Dickson, who was working in a local bookshop. There was a new Jules Feiffer book coming out, called Tantrum. He had ordered an extra copy for me.

I had stopped reading most comics a few years earlier, limiting my comics-buying to occasional reprints of Will Eisner's The Spirit. (I had no idea that Feiffer had once been Eisner's assistant.) I was no longer sure that comics could be, as I had previously supposed, a real, grown-up, medium. But it was Feiffer, and I was just about able to afford it. So I bought Tantrum and I took it home and read it.

I remember, mostly, puzzlement. There was the certainty that I was in the presence of a real story, true, but beyond that there was just perplexity. It was a real 'cartoon novel'. But it made little sense: the story of a man who willed himself back to two-years of age. I didn't really understand any of the whys or whats of the thing, and I certainly didn't understand the ending.

(Nineteen is a difficult age, and nineteen year-olds know much less than they think they do. Less than five year olds, anyway.)

I was at least bright enough to know that any gaps were mine, not Feiffer's, for every few years I went back and re-read Tantrum. I still have that copy, battered but beloved. And each time I re-read it, it made a little more sense, felt a little more right.

But with whatever perplexity I might have originally brought to Tantrum, it was still one of the few works that made me understand that comics were simply a vessel, as good or bad as the material that went into them.

And the material that goes into Tantrum is very good indeed.

I re-read Tantrum a month ago.

Now, as I write this, I'm in spitting distance of Leo's age, with two children rampaging into their teens: I know what that place is. And I have a two-year old daughter -- a single-minded, self-centred creature of utter simplicity and implacable will.

And as I read it I found myself understanding it -- even recognising it -- on a rather strange and personal level. I was understanding just why Leo stopped being 42 and began being two, appreciating the strengths that a two year old has that a 42 year old has, more or less, lost.

Leo's drives are utterly straightforward, once he's two again. He wants a piggy back. He wants to be bathed and diapered and fussed over. As a 42 year old he lived an enervated life of blandness and routine. Now he wants adventure -- but a two year old's adventure. He wants what the old folk-tale claimed women want: to have his own way.

Along the way we meet his parents, his family, and the other men-who-have-become-two-year-olds. We watch him not burn down his parents' home. We watch him save a life. We watch his quest for a piggy-back and where it leads him. The story is sexy, surreal, irresponsible and utterly plausible.

Everyone, everything in Tantrum is drawn, lettered, created, at white hot speed: one gets the impression of impatience with the world at the moment of creation -- that it would have been hard for Feiffer to have done it any faster. As if he were trying to keep up with ideas and images tumbling out of his head, trying to capture them before they escaped and were gone.

Feiffer had explored the relationship between the child and the man before, most notably in Munro, his cautionary tale of a four-year old drafted into the US army (later filmed as an Academy Award-winning short). Children populated his Feiffer strip, too -- not too-smart, little adult Peanuts children, but real kids appearing as commentators or counterpoints to the adult world. Even the kids in Clifford, Feiffer's first strip, a one-page back-up to The Spirit newspaper sections, feel like real kids (except perhaps for Seymour, who, like Leo, is young enough still to be a force of nature).

Tantrum was different. The term ‘inner child’ had scarcely been coined, when it was written, let alone debased into the currency of stand-up, but it stands as an exploration of, and wary paean to the child inside.

When the history of the Graphic Novel (or whatever they wind up calling long stories created in words and pictures for adults, in the time when the histories are appropriate) is written, there will be a whole chapter about Tantrum, one of the first and still one of the wisest and sharpest things created in this strange publishing category, and one of the books that, along with Will Eisner's A Contract With God, began the movement that brought us such works as Maus, as Love and Rockets, as From Hell -- the works that stretch the envelope of what words and pictures were capable of, and could not have been anything but what they were, pictures and words adding up to something that could not have been a film or a novel or a play: that were intrinsically comics, with all a comics' strengths.

I am delighted that Fantagraphics have brought it back into print, and, after reading it, I have no doubt that you will be too...

Keep up to date with all things 'Neil Gaiman' related here...