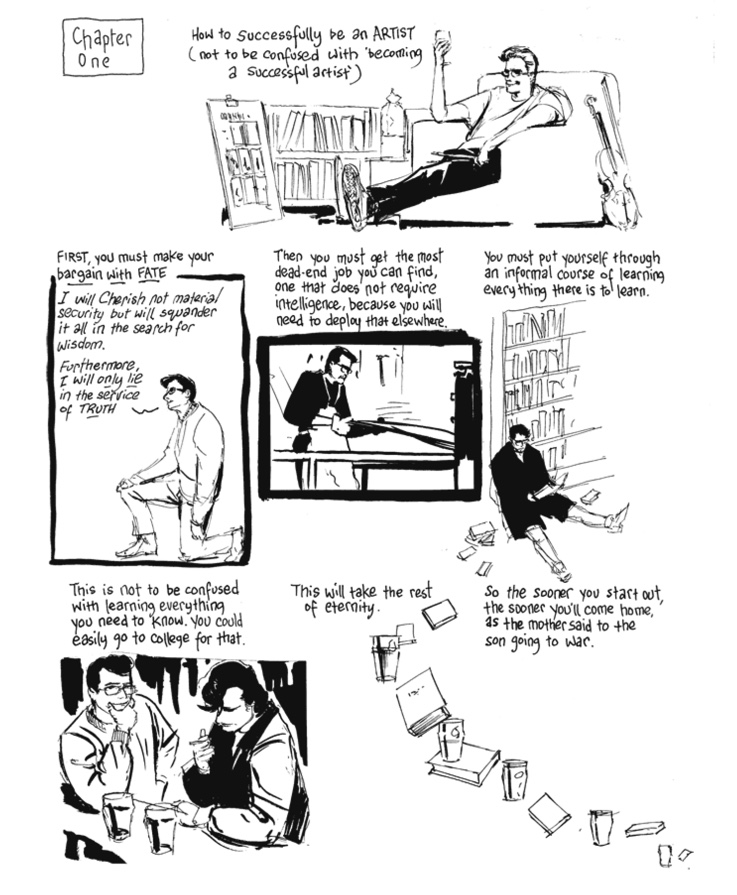 Alec: How To Be An Artist (2001)
by Eddie Campbell
"Graphic Novel... The term will embody the arrival of an idea; a serious intent will be brought into the common comic and remain as a trend through the last quarter of the twentieth century, perhaps further. The trend will be revealed through attempts to build extended works using the mechanics of the humble comic strip. They are probably to be numbered in thousands. Such a waste of paper is bound to make you wonder if the end result can be worth it. Some will be bad, some dull, perhaps the worst crime a comic can commit. Some will be no more than regular comic books dressed up pretentiously. Some will be well-meaning, some bright. Some may be good even, and just not make my list because I'm a fallible clairvoyant. There will be around four dozen books at year 2001 whose theoretical aggregation (for in reality we cannot expect them all to like each other) will nevertheless imply a worthwhile phase in the human continuum, and to be a part of such a moment is perhaps the longing at the heart of artistic ambition. Needless to say, some of those authors listed will make shorter works superior to the long ones for which I have celebrated them. I am pointing out the landmarks. May a perceptive historian map the ground between and may his book be better than some of the stupidities out there."
~ Eddie Campbell, from Alec: How To Be An Artist

Eddie Campbell is the celebrated creator of Alec and Bacchus, and collaborator (as artist) with Alan Moore on From Hell. His recent book The Goat-Getters explores the early years of the newspaper strip.